Enter a Space for the Magic of Healing and Learning 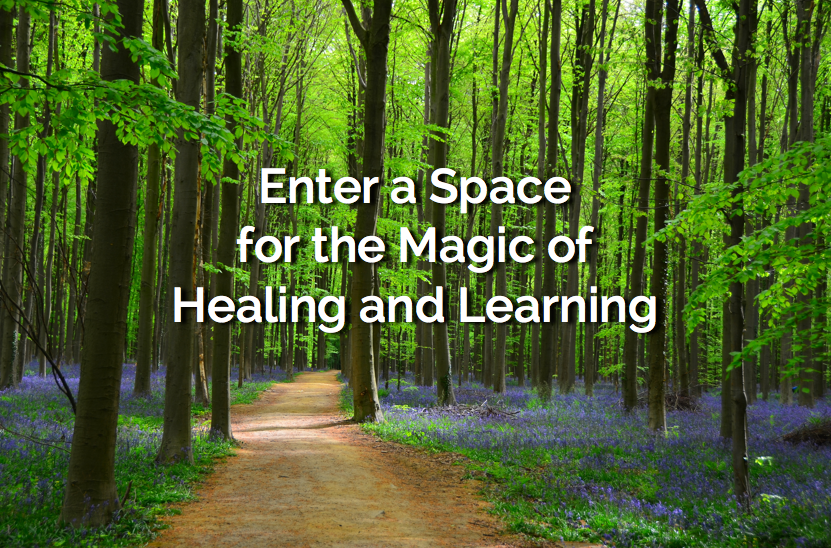 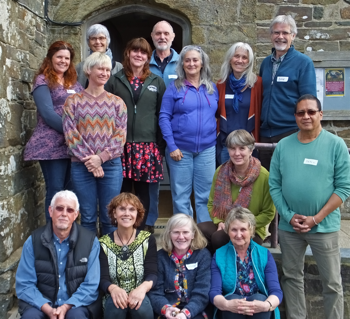 I’m still enjoying the reverberations from a Healing Chant workshop I led in Llanrhian, Wales, a week ago. It was a truly magical time. There were dear friends from Wales, London, and even Amsterdam, who came. Don and Jayne MacGregor hosted us with such care. The venue was a converted old one-room schoolhouse made of stone that was perfect for our session.

Llanrhian is near the ancient cathedral of St. David’s, in Pembrokeshire on the Irish Sea. The area, itself, is full of magic—green pastures lined by Welsh hedgerows and filled with sheep and lambs at this time of year, with magnificent granite cliffs overlooking the sea.

Two days before the event I had reached out to Gail Stewart from Cardiff, whom I’d just met via Facebook. I’d learned hat she offered sound baths and had a marvelous voice. And she was coming! On a lark, I asked Gail if she would offer a sound bath session after lunch. She agreed.

Gail’s session was superb. She was well-equipped with singing bowls, chimes, a gong and more. Each sound she played resonated deeply in the body. It was elevating.

The high point of our day came shortly after Gail’s session. I asked the women to form a circle, sitting in chairs in 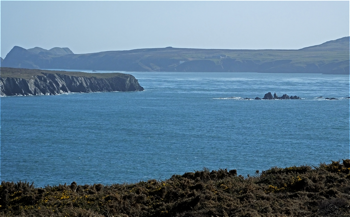 side a group of standing men. The women named some of the issues that are up for the women in their lives, including themselves. The men chanted to surround, uplift and bless what the women had brought. Then we reversed the process with the men in a circle within the circle of women.

One person asked, “Why did this chant go so deep?” I answered that I wasn’t really sure, but that this was my guess: We don’t often find a way to share deep spiritual intimacy with the opposite sex in a way that is nonpersonal and devoid of some of the strange, ego-based factors that so often are at play between men and women. And we don’t have many rituals in our culture in which a group of men and a group of women share an experience of spiritual intimacy in relationship to each other. When we do, it satisfies something deep in the soul.

The following day, Don and Jayne invited us to a weekly meditation session in their home, followed by tea. Jayne was encouraging me to speak about the spiritual community where I live, Sunrise Ranch, something I always enjoy doing. A woman who had attended Healing Chant the day before stopped me partway through my inspiring report on the Ranch to ask, “Do you have a guru?”

Hmmm. I’ve never been asked that before. Almost without thinking, I answered, “Yes. Me.” She looked puzzled. She had just spent a day with me and it was clear from the look on her face that she didn’t consider me the guru type. I really hope that anyone from Sunrise would have answered in the same way.

“No, I mean do you have someone who really is a spiritual teacher for the community? You know, a guru.”

It turned out that she had lived in the Rajneesh community in Oregon many years before. She wanted to make it clear that there was a lot about that experience that she appreciated. And still, there were elements that were limiting. She was curious about how we handled similar matters at Sunrise Ranch. Did we welcome it when people had an issue with something that was happening in the community? I told her that, of course, we did. Her prior experience was that any discussion about things that weren’t working was unwelcome. She said this was part of what was called a surrender teaching. It didn’t sound like anything I would have put up with very long.

The whole interchange made me reflect on Sunrise Ranch, and on my own teaching and leadership. I also reflected on what had made the day of Healing Chant go so well. There is such suspicion of anyone who offers something spiritual. And for good reason. Even a slight change in how someone connects spiritually makes a great difference in their life. Such a change creates the greatest leverage for transformation possible. So while there is great opportunity for a positive experience, there is also the potential for a person’s life to go off track, even under the best of circumstances. But it isn’t always the best of circumstances. Spiritual teachers and leaders can go off track themselves, and end up intruding in people’s lives in unfortunate ways.

In the Healing Chant sessions that I lead, I always begin in a circle. I invite the participants to create a space within that circle that holds creation—that allows the magic of life to flourish, bringing healing and change. I tell them that people have been meeting in circles since ancient times. And that the circle is the shape of the cosmic womb that holds living processes safe.

I believe strongly that it is a primary responsibility of any real teacher to create this kind of space with people. A teacher can’t do this all by themselves. It takes a group of people to make space for magic. But a teacher has a vital role in leading people to this crucial factor for the magic of learning and healing to occur. In my book, Becoming a Sun: Emotional and Spiritual Intelligence for a Happy, Fulfilling Life (being published later this year), I speak of this in the second chapter as The Atmosphere of Understanding.

As I see it, the greatest issues in our world today are spiritual. And if you look behind any other kind of issue that you think may rival the spiritual issues of our day—global warming, terrorism, lack of authentic political leadership, to name a few—you will see a spiritual issue lurking that caused it.

So I believe that there is a very great need for educators who are authentic and accurate, and who can create an atmosphere of understanding in which real spiritual learning and transformation takes place. We need spiritual educators who create the conditions under which a person can connect with their primal spirituality—not the beliefs and ideas of the educator imposed on the participant, but the innate spirituality we were all born with.

That primal spirituality doesn’t need improvement. It simply needs the opportunity to emerge through the person. When it does, their confidence in who they are grows, and so does the wisdom and strength of their actions. When they connect with their primal spirituality, they bring a loving presence into what they do. All these things provide a basis to address the problems of our world, large and small.

I don’t believe the world needs more gurus who teach people the guru’s version of spirituality. We need people who have reconnected with their own primal spirituality so that they can share that experience. And evoke from us all our innate ability to enter a space for the magic of healing and learning, and hold the atmosphere of it.

If you are interested in being part of a circle of people who hold a space for learning and healing, join me for my Becoming a Sun workshop at Sunrise Ranch this summer, July 12th to 16th. And if you can be in Wales next spring, and you would like to be part of a Healing Chant session, let me know. We’re already scheduling another session.